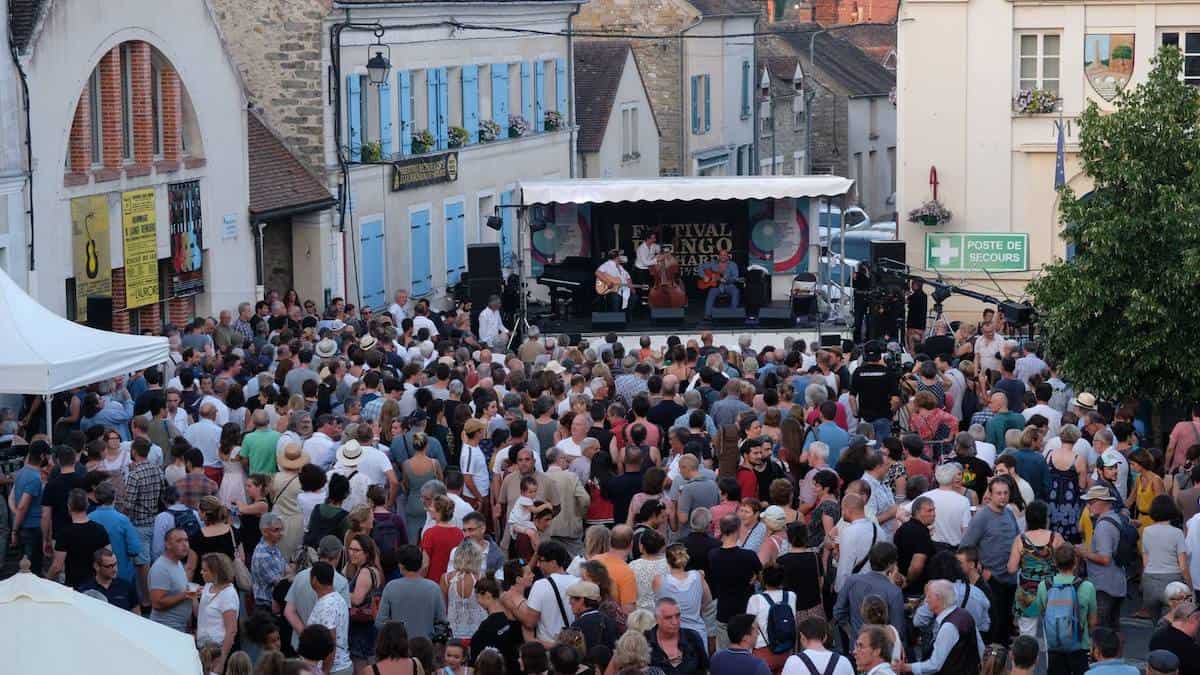 JGT Contributor Barry Wahrhaftig shares his recent experiences from The Django Reinhardt Festivals of Samois and Fontainebleau. He also attends a Masterclass with Guitarist David Reinhardt.

First, some background, I’ve been studying and playing ‘Gypsy Jazz,’ since 2002, and I have been attending the Django Festival in Samois sur Seine, France since around 2006. The Festival began in 1968 to honor Reinhardt’s memory. The festival was originally a one-day event held every five years, which turned into an annual five-day event in 1983.

Django was living in this sleepy village on the Seine river when he passed away from a stroke on May 16, at the young age of 43.

Django had gone to the bucolic little town with his son Babik and wife Naguine in the Fall of 1953. He was taking some time to relax and regroup. The war was over, and it was a time of change. Django was captivated by the new sounds of Be-Bop, and the recent records by Charlie Parker and Dizzy Gillespie were in heavy rotation at his rented flat.

At the time Reinhardt was moving away from the style he and violinist Stephane Grappelli had pioneered with the Original Hot Club of France, which was inspired by and based somewhat on the Hot Jazz of players from the US like Louis Armstrong. He was using a Stimer pickup on his Selmer guitar, which gave him an acoustic-electric sound, more suited to the modern sound that he was going for.

Django had visited Samois a few years before and loved it. He grew up living in gypsy caravans, so a small town in the countryside was likely more appealing to him than the noisy crowded streets of Paris. In addition, he could go fishing in the Seine, which was a few steps from his door. Django was also quite a good painter, and he passed his time there doing that as well.

When I first started going to the Samois Festival the concerts were held on a little Island, (Berceau), in the Seine, not far from the house where he and family stayed. At that time the Festival was usually held on the last week of June, Wednesday to Sunday. I can recall how I felt the first time I went to the festival and the nearby campground at Samoreau.

Listening to the sounds, jamming and sharing drinks and food with my fellow Django-fans, I felt like I had found my ‘tribe’ and in a sense my place in the musical world.

It was a sense of belonging – a wonderful scene; everyone is welcoming, and you can jam with players from all over the world, many speaking different languages. Someone just starts a song and pretty soon everyone joins in. Usually without any discussion of title, key, and usually without charts or phone screens. This is a jazz style that is kept alive by an oral and aural tradition, played and learned by ear, not in college classrooms from textbooks!

There are two campgrounds; Samoreau which is about two miles south of the island on the east bank of the Seine, and Petit Barbeau, about a mile north of town on the west side of the river. For many years at the end of June the faithful, including many of his fellow Gypsies, would gather in Samois and at campgrounds. Fans drive with their campers from the UK, Netherlands, Germany, USA, Australia, Japan, Bahrain, and many other countries.

In 2016 the Seine flooded, and completely submerged the island just a few weeks before the festival…

The organizers scrambled and were able to move the Festival to Fontainebleau, a bigger town a few miles South of Samois. They were able to save the fest that year, which was quite a feat, and the main festival is now in Fontainebleau.

It’s a much bigger event now, about four to five times as many concertgoers, and is about the size of an American Football field. They still have a luthier’s village, where players can jam and check out amazing European built gypsy g, and there are food and beer stands, etc.  But frankly, it isn’t quite the same for me and many others now that the festival is no longer at Samois.

There is also a special mass for Django at the old church on Sunday, with live Gypsy Jazz music. The last time I attended Django’s great g Simba Baumgartner played with two of his mates.

Before and after the location change many of the devotees spend their time mainly at the Samoreau campground, jamming and partying day and night, perhaps going to the festival one night to see their favorite players.

The last week in June is a time when Gypsies from all over Europe converge on Samois, sort of like a big very-extended family reunion.

In addition, the top Manouche (gypsy) stars often visit and stay at one of the campgrounds anyway, so you can often catch players like Bireli Lagrene, Fapy Lafertin, Stochelo Rosenberg, and others hanging out and jamming whether they are playing the festival or not.  It’s worth noting that although the festival was started to honor Django, it isn’t strictly a Gypsy Jazz Festival. There are mainstream-jazz and even some pop and funk bands. Like many Jazz festivals, other acts are needed to pay the bills.

Obviously, that’s another reason why some of the fans just mainly go for the scene at Samoreau. I was a bit on the fence about going this past year, then I saw a Facebook post announcing a Masterclass by David Reinhardt, Django’s grandson for the 1st week of July at Petit Barbeau campground, so I jumped at the chance to take part!

The class would be held outdoors at Petit Barbeau on July 3, 4 & 5, off on Sat. the 6th, culminating with a group performance on the Luthier’s stage at the Fontainebleau Festival on Sunday, July 6. Breakfast and lunch with BBQ, ’, dessert and of course vino, were included. Prepared by David and his wife.

Guitarist Samy Daussat would be teaching, as well. My friend, expert Djangologist Denis Chang would be assisting with the material and translation duties. David speaks mainly French, and most of the class are not yet fluent.   We worked on three songs written by Django; ‘Troublant Bolero,’ ‘Belleville,’ and ‘Blues for Ike.’

I was staying at my usual flat near the island, so I biked up to Petit Barbeau with my Gypsy guitar in a gig bag on my back on Wednesday morning.

David demonstrated the parts to ‘Troublant Bolero,’ including chord voicings, how to play the rhythm part, melody and even some of the bass, which can be incorporated into the rhythm part and is a key part of the song. He also gave out chord sheets for the songs and demonstrated some cool solo ideas and even covered some harmonic variations on the piece as played by Bireli. We were able to take cell phone videos of all the above, but we were asked not to share and post. Totally fair by me…

The classes had a nice spirit of camaraderie, and my fellow students and David, Denis and Samy all had a great sense of humor. We learned by rote, in the Gypsy Jazz tradition. We all played the intro and form for the soulful ‘Troublant Bolero.’ It was quite nice hearing everyone lock in the Latin groove, sweet and warm, totally acoustic, no amps. About 9-10 guitarists, led by David, with Nataly Merchuk on violin and a Norbert Lechat on harmonica, no bass.

For soloing; David talked about some approaches; including harmonic generalization for ‘Belleville,’ the piece is mainly Rhythm Changes in ‘D’. He also covered some basics on outlining chords and some chordal substitutions. Most of the top Gypsy Jazz players learned by rote (by ear), and they often don’t read music, and they don’t use a theoretical jargon. Again, d fine with me!

Studying jazz at college, reading music and theory fine, but at the same time, we have all heard lots of very schooled players who are frankly aren’t so interesting, and will probably never sound as good as players like Fapy Lafertin, Stochelo Rosenberg, and others who do not read music.

We all worked on our songs and memorized them, no iPads or music on stage!

On Sunday, we met up at the entrance to the Fontainebleau festival, and we all went in together with David and Denis. A quick sound-check on the Luthier’s Stage – then David Reinhardt did an intro on in French. Afterwards, we played our songs on the Luthier’s stage at the festival, with Denis Chang on bass.

We each had four or eight bars for soloing in each song. The sound crew had an interesting way to handle that; one fellow had a wireless mic on the detached pole from a mic stand, so he could move from player to player. Everyone did pretty well, the audience dug it, and after one of my solos I thought I heard David who was in back of me say ‘yeah, cool’ or something like that!

It was all over fast, and then we hung out at the festival, had some beer and food and found our way back to our respective flats or tents. On Friday afternoon, after the music class was over at Petit Barbeau, we all gathered around to hear David talk about the history of Gypsy Jazz, Django and the history of his family and the Gypsy tribes, with Denis acting as translator.

There was a Q & A period after his talk, and one of the questions was ‘is it OK to call the style, Gypsy Jazz’? David kind of laughed, as if the question was silly, he said that name was fine. In France the word for Gypsy is Manouche, so it is called ‘Jazz Manouche’ there. He did say that it could be called ‘Django Jazz’ as well.

Denis Chang on David Reinhardt’s involvement, “For a number of years David Reinhardt didn’t attend the festival, but in recent years he developed an interest in bringing back the Reinhardt family presence, both branches of the family, to the area during festival time. He also wants to share the history of his family and his people with the world.”

In the past few years, I’d usually get a press pass and go to the festival each night, write some reviews and spend time at Samoreau jamming and seeing my friends. I came to realize how much my friends in the scene mean to me, so I am OK with just going to a night or two at the festival.

The class with David Reinhardt was a great experience at many levels. Highly recommended.

I don’t know at this time if he’ll be doing it again next year, but you can reach out to him on Facebook.

And I do recommend attending the festivals, Samois and Fontainebleau!

I ‘may’ be hosting a trip to Samois & Fontainebleau next year – so keep checking back to Jazz Guitar Today or contact me via HotClubPhilly.com

If you want to learn more about Django Reinhardt and the history of the Gypsies check out; ‘Django, The Life Music of a Gypsy Legend’: by Michael Dregni, ‘Bury Me Standing’: The Gypsies and Their Journey, a terrific book by Isabel Fonseca.

Barry Wahrhaftig is the leader of the Hot Club of Philadelphia. He has studied with players like Fapy Lafertin, Stephane Wrembel & Howard Alden. He can be reached at thru www.HotClubPhilly.com for lessons, transcriptions, questions & comments about the article.