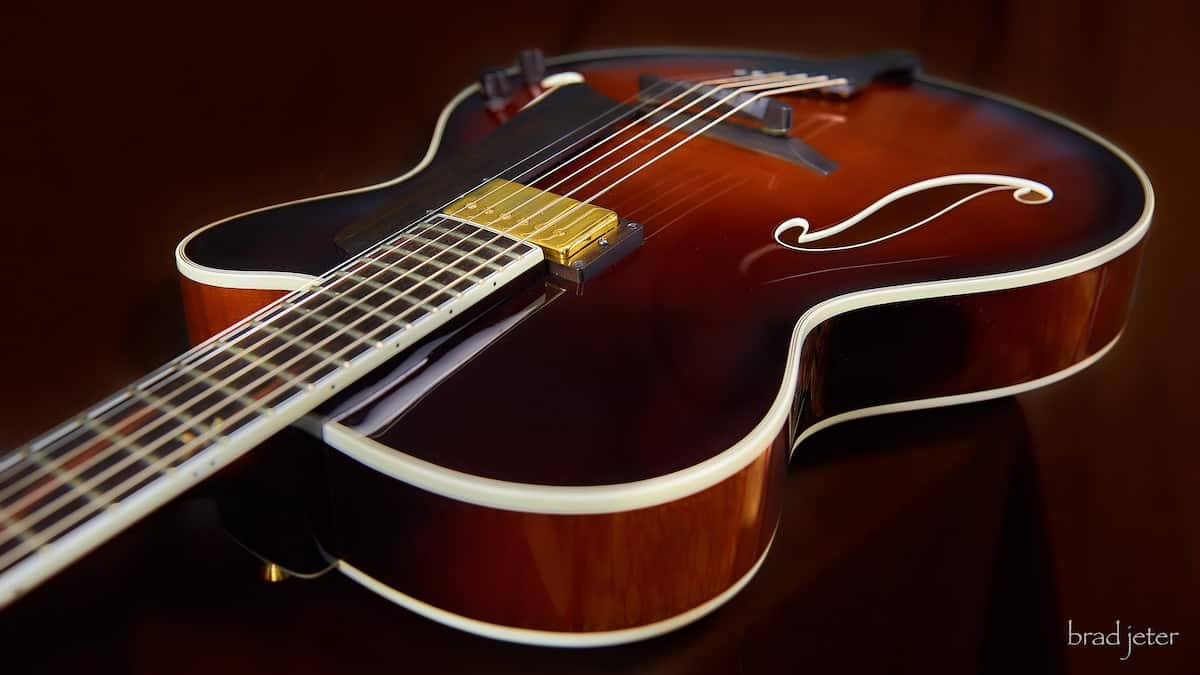 In this exclusive Jazz Guitar Today review, contributor Brad Jeter takes a very close look at the Benedetto 16B.

This has proven to be the most challenging review I have endeavored to write. The reason for this bold statement may sound surprising: simply put, the Benedetto 16B is as close to perfect as any guitar I have ever had the pleasure of playing. As sensational as that statement may be, the Benedetto 16B has had me under its spell since I opened the case. With unreserved and complete candor, this assertion is not exaggeration or hyperbole. As a result of my being gobsmacked, I have exercised a more critical eye in my long-term evaluation of the guitar which has only led me to greater admiration. Let’s get things rolling with a bit of history.

Stringed instruments have been around a long time–a very long time. There are many examples dating back over 2500 years. Sistras, Harps, and Lyres are depicted on stone and earthenware as far back as the Early to Middle Bronze Age. There is even evidence of primitive instruments using some type of vibrating “strings” stretching back tens of thousands of years.

We then fast forward to the Renaissance, particularly Italy, when the design, and importantly, stringed instrument design and execution were greatly refined. Basically, it is this period (approximately 1600-1750) where a time-traveling player of today would not only recognize but also be familiar with how they felt and played. This refinement of both the structure and artisanal techniques is the most universally recognized today by the violins crafted by Antonio Stradivari.

These were not only amazing instruments but they changed perceptions of what an instrument could be–not only functionally or in a utilitarian sense–but they began to be considered works of art. As a result, they became something transcendent; Instruments sought out and appreciated by the very finest musicians and admired universally for their beauty of tone, playability, and aesthetics.

The reason I call attention to the violin maker, Stradivari, is simple enough. Instrument makers were classified in broad, sweeping terms: strings, organs, harpsichords, and brass instruments. There really wasn’t a distinction between a violin maker and a guitar maker until a bit later in history.

The Benedetto 16B is not only a world-class instrument, it can and should be considered the result of passionate dedication to the art of the luthier.

Those who settle for nothing less than perfection are indeed a rare breed. The luthiers who craft these instruments are not only part of this culture, they represent the very apex of what is possible.

Obviously, such instruments come at a price (this particular 16B is $11,500). These are not only crafted for the current generation of accomplished players but should be considered heritage pieces that will be played and admired for many generations. Such instruments are often considered the very incarnation of a player’s muse. Inspiring and beguiling, the Benedetto 16B is to be admired not only for its flawless execution of the luthier’s art, but also to be admired for its ineffable siren’s call to, “Play me and we will ascend to new heights together”.

The Benedetto 16B is carved spruce top on a 16” Venetian cutaway body made of maple. The neck is maple with an ebony fretboard. It is a 22 fret, 25” inch scale length. The bridge is ebony as well as the tailpiece. The 16B has a single humbucker at the neck position with volume and tone controls. High-quality Gotoh tuners keep everything solidly in tune.

“One should not become an artist because he can, but because he must. It is only for those who would be miserable without it.” ― Irving Stone, quote from The Agony and the Ecstasy

When you first pick up this guitar, you are immediately taken with the overall quality of fit and finish. It is a stunningly beautiful guitar and I have often found myself just admiring it from afar but that is just an added bonus.

Getting down to business, the 16B plays effortlessly all the way up and down the neck. Every fret has been polished to perfection from the 1st to the 22nd. A technical detail that may not be apparent is how every fret is accurately crowned so that micro-intonation bugaboos are simply not in play. It plays in tune; it stays in tune. I’ll also mention that the frets are all consistently well-slotted with no gaps. What this means is that there are no dead spots–every note rings long and true. Strings have a buttery smooth feel as a result and to emphasize again–because it’s a big deal–consistency reigns supreme.

If you have read my other reviews then you know how important I value the acoustic quality on a guitar–acoustic, semi-hollow, and solid body alike. It is one of the first things I evaluate. If a guitar doesn’t sound great unplugged, it isn’t going to sound great plugged in. The Benedetto 16B is an acoustic cannon. I was taken aback and just how powerful and authoritative its voice is. It is a balanced blend of muscular bass, silky midrange, and a just-right-bite on the top end. Complex chords emanate forth with distinction and definition whether strummed or finger-picked. I describe this quality as well sorted–you hear the entire chord ring out true with all its complexity.

Digging in and running single-note lines proves to be just as effortless.

I was also quite struck by how responsive this guitar is to picking dynamics. From just a whispery brush to an aggressive attack, the dynamic range seems to have no limits. I noticed no compression or harmonic collapse when going large and loud with lines. The Benedetto 16B holds its composure with aplomb.

Plugging in, I found my expectations easily met and exceeded. The warmth and clarity the 16B exhibits acoustically is maintained faithfully with the pickup Benedetto chose to use. Balanced and flattering, what more can be said? I can’t imagine anyone ever considering a pickup swap–it’s just that good.

This is a thoroughbred guitar through-and-through. In hand, you immediately recognize that nothing is a result of compromise. It is obvious that Benedetto is committed to making the very finest guitar possible using only the finest materials and exceptional luthier skills.

Perfection does come at a price. While certainly not an inexpensive instrument, the end result should be considered an exceptional value. The Benedetto 16B is simply one of the finest instruments available for the accomplished professional as well as the rest of us who value aesthetic and functional perfection. It is not only a masterpiece for the player today, it is truly an heirloom piece that will serve the discerning player for generations to come.

Related Topics:Guitar Review
Up Next

Corey Christiansen Shares How He Gets His “Sound”