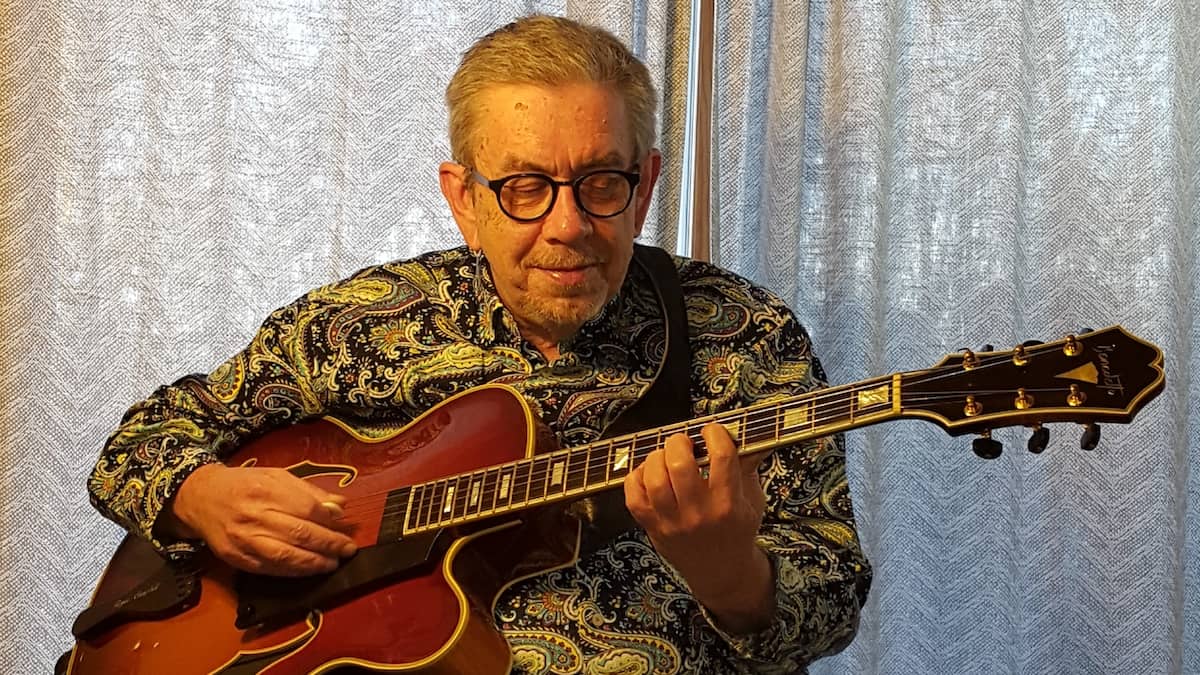 JGT contributor Joe Barth talks to guitarist Royce Campbell about his playing and his incredible career.

Royce Campbell was born in Indiana but grew up around the world because his stepfather was a career Navy man.  As a guitarist, he toured with Motown singer Marvin Gaye and later played for over twenty years in Henry Mancini’s orchestra until the composer died in 1994.

RC:  I was around 16 when I started playing jazz. My uncle, Carroll DeCamp was most helpful in my development. He was an accomplished pianist/guitarist/arranger who played with Wes Montgomery’s group in the 1950s. I learned more from him than I could have from a music school. He also introduced me to a host of older players in the Indianapolis area who also contributed a lot to my development. I learned on the gigs with them rather than in classes. I got a lot of work as a pit orchestra player for musicals and had to develop my reading skills for those jobs. Even though these weren’t jazz gigs, I grew a lot as a player and as a professional.

RC:  The  Incredible Jazz Guitar of Wes Montgomery was among the most influential albums for me because it was the first jazz LP I ever bought. It introduced me to jazz guitar. Pat Martino’s album The Visit was another one that was an early influence. It introduced me to Martino and was the first album I attempted to do some transcribing. The other is also a Wes album, Smokin’ at the Half Note. Since this album was live it presented Wes in a looser environment where he could really stretch out so I could hear Wes at his very best.

JB:  Practice and listening aside, can you pinpoint one or two ‘things’ that really boosted your profile and career toward where it’s at today?

RC:  Initially, it was my recordings with other guitarists that helped me build a profile in the first place since so many of them were famous. I recorded with Pat Martino, Larry Coryell, John Abercrombie, Bucky Pizzarelli, Tal Farlow, Jimmy Raney, Mundell Lowe, Cal Collins, Charlies, Byrd, Gene Bertoncini, Herb Ellis, John Pisano, and Dave Stryker. I am really grateful that I had the chance to be forever associated with them in this way.

In later periods of my career, the other ‘thing’ that contributed to my profile was the recordings I was able to do for small labels in Holland, Germany, Italy, and Japan. Those labels specialized in building catalogs of world-class recordings despite the fact that they did not have the resources of bigger labels, and they also gave me a chance to play with and be associated musically with some extraordinary musicians.

JB:  Talk about your musical experience with the great Henry Mancini.

RC:  My 19 years with Mancini have given me the fondest memories of my career. Not only did I play great music with Mancini, but he was really a great bandleader who was always kind, generous, and loyal to his musicians. I feel that playing his compositions all those years helped my development as a composer.

JB:  What was it like working with the Smithsonian Jazz Orchestra in the Washington DC- Northern Virginia area?

RC:  Years ago, I played in DC with the Smithsonian Jazz Masterworks Orchestra which is an awesome big band. It might just be one of the most under-appreciated collections of musicians anywhere. I had the honor and privilege to play with incredibly talented colleagues, real” jazz musicians’ musicians.”

RC:  Due to health issues I’m semi-retired now, but I do some gigs at retirement communities that are rewarding because the residents appreciate the music so much. I also still compose and work on recording projects, some my own and some as collaborations.

JB:  Talk about your composing.

RC:  Composing is incredibly rewarding. To create something from nothing is pretty special; there is an energy and beauty to the process that is an important counterpoint to some of the darker aspects of our world right now.

I still love to do recording projects. The whole planning process, the actual sessions, and the post-production work are all exciting and energizing, and even though I am getting older, that process never does.

In a bigger sense, one of the most rewarding aspects of my recording career in particular is that those recordings still draw new, young audiences. It seems that younger generations don’t get hung up as much on specific genres of music or time periods and fashions; they are willing to engage with a broader variety of styles. I am always gratified when I hear from young fans—some fellow guitarists others just new fans—that they enjoyed listening to particular albums. It might be corny, but it makes the last 50+ years in the biz really worth it.

RC:  I usually use a Benedetto Fratello guitar and an Acoustic Image amp. I do some gigs that include some funk; for that, I use a Gibson ES-335. I also still play a Gibson L5 from time to time. I love the difference in tone that I get from the Benedetto and the Gibson. One is bright and a little cool, and the other is darker and warmer; each offers different possibilities in terms of what I can create.

JB:  Tell me about one of your CD albums that best represents your playing.

RC:  It’s difficult to pick just one because I’ve done different styles from mainstream jazz to smooth jazz to free jazz. My personal favorite of the 33 CDs I’ve released is the Tribute to Henry Mancini CD. It was an inspiring moment when we recorded it. Mancini was definitely present, and we could all feel it. It made us all play at our best. I recently had a gig with my friend, bassist Bill Moring, and completely without prompting he said much the same thing. He also still remembers that session as musical magic.

JB:  How has your playing changed over the years?

RC:  I hope it’s gotten better. I feel that over the years my soloing has gotten more melodic. Because I have gotten older and various health conditions have posed challenges, I might not have the same technique I had as a younger player or the speed, but I think my sense of melodic storytelling has been sharpened over the years. Composing and improvising go hand in hand for me and are both ways to tell stories that listeners can relate to. I happen to be a romantic, and melodic lines tell the stories that I want to tell, so I have been working on that all my life, though it’s become even more important in recent years.