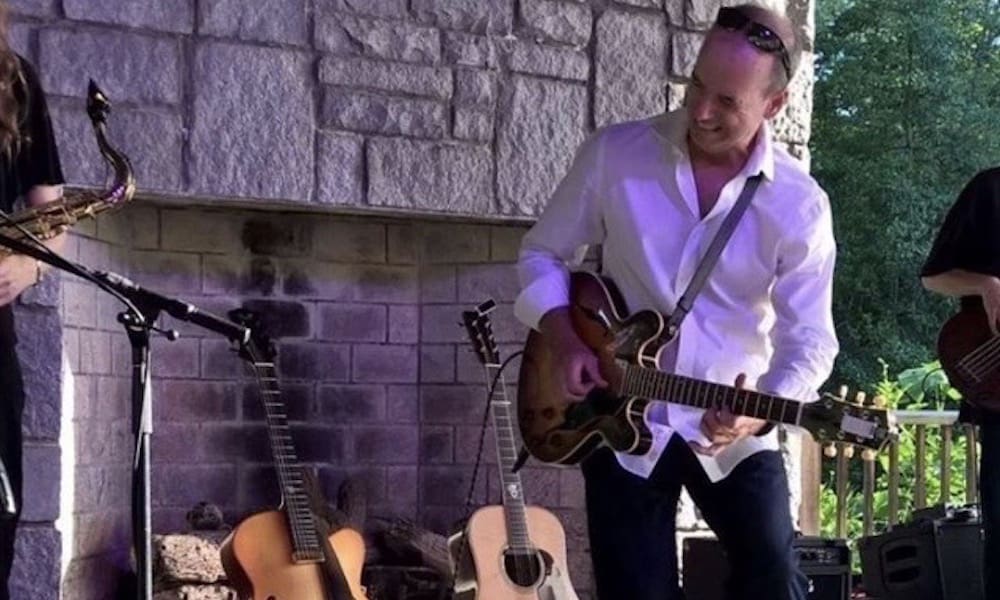 For the longest time ‘jazz guitar’ meant one thing – big fat guitars and have been (for better or worse) called “Jazz Boxes”.

These guitars were arch tops with “f holes”, three plus inches thick and large bodies from 16 to 18 inches.  These were the guitars played by “serious” jazz musicians.  Most all the fathers of jazz guitar used arch-tops, Wes Montgomery, Barney Kessel, Joe Pass, Herb Ellis, George Barnes, Kenny Burrell, Grant Green, and Jim Hall to name a few.

Although there are many brands of these fine instruments, the most iconic archtops came from Gibson – guitars like ES-175s, ES-350, L5s and Super 400s and the popular signature models from Johnny Smith, Tal Farlow, Barney Kessel and later, Herb Ellis.  These jazz guitars were expensive as they required a lot of handwork and in most cases premium materials.

In addition to being expensive, the carved arch tops were fragile, physically big and prone to feedback.  Although less expensive and more versatile, laminate guitars of similar proportions still did not cover the gamut of modern gig scenarios.  For that matter, they did not address many of the contemporary styles.  Many players gravitated to the “thin line” 335 style guitars – a design much different from fully hollow designs of the 175 or L5 models. The thin lines had a 1-3/4 inch thick body and usually a center block in the body to keep resonance – and therefore, keeping feedback under control.

Benedetto’s efforts ushered in a list of great American luthiers like Buscarino and Monteleone to name a few.  There was a real resurgence in building, playing and collecting – the “golden age” of arch tops was born.  Chronicled and fueled by Ed Benson’s “Just Jazz Guitar” magazine, there was a tremendous interest in jazz guitar.  Let’s face it…the instruments are beautiful, elegant and in the hands of a master have a tone and a dynamic that is just organic.

Add to the mix, the Fender Telecaster.

While not originally cheaper than a ES-175, was small, comfortable, and sturdy.  Of course, Tele’s had solid bodies so they had very little acoustic output – thus preventing feedback.  So they could be played LOUD… If your set included rock, R&B or funk tunes, this newer design was (and is still) much more versatile.  One would assume these factors were why players like Ed Bickert and Ted Greene broke ranks with their colleagues and played jazz on Telecasters.

Today, it is more common to see solid bodies and thin lines on the jazz stage rather than a full bodied instrument. Probably in no small part due to the popularity of major players like Julian Lage, Bill Frisell, and John Scofield who regularly record and perform with Telecasters and thin line guitars.  The popular solid and thin line options are offered by manufactures including Gibson, Ibanez, Epiphone, Eastman, D’Angelico, PRS, Benedetto, Collings, Godin, Fender, as well as many others.

This mirrors what I see when I am out and about.  I see more “jazz” being played on ‘thin line’ ES 335 style guitars and solid bodies like Stratocasters, Telecasters, Les Pauls, and a host of similar non-traditional instruments.  I am also noticing the kind of compositions and approaches to the music really call for the more rock and blues influenced tones.  In addition, today’s players are as likely to have discussions of amps and pedals – something that was not as significant in the past.

In my opinion, you can get a very pleasing and convincing old school arch top tone with the solid bodies and thin lines.

While maybe not “dead on” – they can be pretty close. Thin lines and solid bodies can also get those blues and rock tones that these guitars are known for.  Again, arch tops are great for those jazz tones but there are issues with feedback at modern stage levels, as well as tonal spectrum – so these guitars are problematic for many types of gigs.

In the last decade much has been done to bring down the cost of archtops.  However, if you’re a jazz student or a gigging musician playing lots of styles, you probably want a guitar that covers as many bases as possible. Not to mention your budget most likely does not allow for two or three instruments… So the young players are moving toward the thin lines and solid bodies.  Larry Carlton famously moved to primarily a 335 to cut down on the number of guitars he was carting to sessions.  Hey, it worked out for him…

I have to say – if you’re playing in the old school tradition, nothing sounds like a big bodied arch top.

In most cases, the challenges are manageable and benefits are well worth the effort. There is simply no comparison side by side, overtones, etc. And I love to hear an arch top in the hands of a master.

I am the owner of three prized arch tops and I love them. Because it’s practical, I take my Strat and Collings out most often to gigs.  However, given the right circumstances, particularly with an acoustic piano or acoustic bass, I’m grabbing the arch top.

To answer my question, “which guitar for jazz”? My answer is “all of them”!

Questions for Oz? New Album Release? And anything else…